Diego Armando was born more than fifteen years ago, just when Bankrobber Records was founded, and it’s nothing but the DJ mask under which I hide when I spin records, my exclusive occupation since I stopped working in the best record label in the world.

My relationship with DJing started when I was twelve years old, playing cassettes in teenage parties. Later came the bashes with the Nuiks, an association that, among other things, organised the La Bisbal d’Empordà’s Circus Fair, still going on strong.

By that time I started my radio days in the local station in programs like La Dimensió Desconeguda, Si els Dits Fossin Xilòfons and Morsambxilòfons (with Marçal Lladó).
In those years I used my first nickname, Sembei Norimaki, but shortly after and through Mani (Stone Roses/Primal Scream) and some girlfriends from Barcelona’s Sala Apolo, Diego Armando became my new nom de guerre. Higher than the Sun!

After moving to Barcelona, I learned a lot during the five years I spent working in Scannerfm with Morsambxilòfons, the first radio program I did on my own, where I had the opportunity to explore the most impossible musical connections. In 2015 I picked up some concepts in Soroll de Fons, a program without expiry date or closed regularity that right now is dormant until further notice. 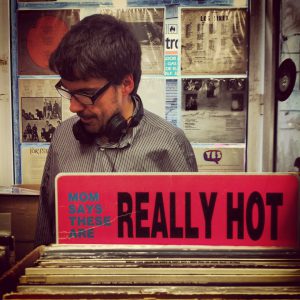 Recently I’ve started to tour Europe and I have a quarterly residence in Bonnefooi (Brussels) in an evening called Santa Maradona Disco Club . In Barcelona, I organise regular parties together with the other members of Finis Africae, a collective made up by Pope aka the Dub Master of Barcelona and Mirandón aka Virrei Amat, in our second home, the Koitton Club; without forgetting the itinerant series of concerts we host and the record label, which we have started with the vinyl release of “Kiu” by Fuego and a collective mixtape to celebrate Finis Africae’s first two years of underground activity.

From time to time I also play records together with usual suspects like Gonzo, Dave Bridge and Doza under the Infra DJ’s nickname. Doza and I form also Wunderkammer, a project where roots music transform into electronica through hip-hop and dub techniques and with an unmistakably punk spirit.

Moreover, I have another project called The Fascinating World of Music, a series of listening sessions where music is listened collectively. In these, I act as a master of ceremonies who selects the music and provide a context for it. Always with a premise – no genre is more valid than other. Free your mind and your ass will follow.

Guillamino has said about me:
Francesc Xavier Riembau i Rosich aka Diego Armando.
Always against the north wind, pounding away, always the glass half full, always up the hill, beard and glasses all the better to see you with, to eat you with. Grandson of an “Indiano” who sought his fortune in America, with a rock & roll spirit, Cuban, Rastafarian, 24-hour digger, Jamesbrownian, Detroiter, with Taliban and Flamenco looks, the right touch of punk and Empordà-scalped!